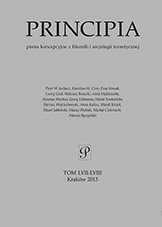 Summary/Abstract: The paper addresses the problem of genotypic prevention, i.e. it poses the question of whether prospective parents may be obliged to prevent the so called reproductive harm, caused by genetically transmitted diseases. First, the paper analyses the harm principle developed by John Stuart Mill. Second, a legal concept of harm is specified, invoking the distinction between a harmful condition and a harmed condition given by Joel Feinberg. It is argued, after Feinberg, that acts of harming must meet some specific conditions, among others there must be a person who is harmed; and either the counterfactual condition or the worsening condition. Third, the conception of prenatal harm and preconception harm is discussed and then distinguished from the so called reproductive harm which is understood as harm caused by giving birth to a person which would be born in a harmful position (with a disability or a disease). The conception of procreative harm poses a philosophical question concerning the non-identity problem suggested by Derek Parfit and discussed by such philosophers as Buchanan, Wikler, Brock, Daniels, Hare, Reiman, Green, Locke to name only some of them. The non-identity problem undermines the concept of procreative harm, since there is no person harmed by the procreative decision when the only alternative for a particular disabled child was not to be born. These considerations lead to the conclusion that a legal concept of reproductive harm is not justified and that it should be replaced by the idea of moral procreative responsibility in the given context.

Regulacje prawne wobec rozwoju nowoczesnych technik prokreacji: analiza roszczenia wrongful life Legal regulations in the face of the development of new techniques of controlling procreation: an analysis of the wrongful life claim 2009 Sprawozdanie z debaty Polskiego Towarzystwa Bioetycznego „Jak uregulować kwestię macierzyństwa zastępczego" Report on the discussion of the Polish Bioethical Society about how to regulate the issue of surrogate motherhood? 2009 Zobowiązania moralne wobec naszych i wobec obcych - komu mamy obowiązek pomagać? Moral obligations towards our fellows and towards strangers – Who are we obliged to assist? 2010 What Is So Unfair about Using Genetic Information? What Is So Unfair about Using Genetic Information? 2010 Transhumaniści kontra biokonserwatyści Transhumanists vs. Bio-Conservatives 2017
2020 © CEEOL. ALL Rights Reserved. Privacy Policy | Terms & Conditions of use
ICB - InterConsult Bulgaria ver.1.5.0917