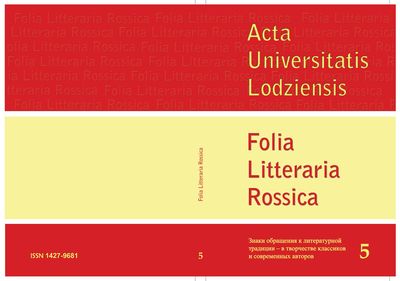 Summary/Abstract: The text constitutes the second part of the publication cycle addressing the problems of translation of the Old Church Slavonic literature into Polish together with the bibliographic date. The first part was devoted to translations from the second part of the 20th century and the beginning of the 21st century. The following article and the bibliography (annex) comprise the period from the beginning of the 19th century until the end of the first half of the 20th century (1806-1948). Old Church Slavonic literary texts, discovered and popularized at the turn of the 18th and 19th centuries and acknowledged as particularly precious literary cornerstones of the oldest Slavic literary output, were translated into many modem languages including Polish. Polish translations from the 19th and the first half of the 20th century mainly focus on three basic texts: Vic Tale of Igor's Campaign, The Nestor's Chronicle as well as on one of the oldest masterpieces of the original Old Church Slavonic literary output St Methodius' Life. The article briefly presents the history of translations of the above-mentioned and also other works. Bibliographic materials in the annex comprise texts translated and published as a whole (or their large excerpts published with the title referring to a given work).