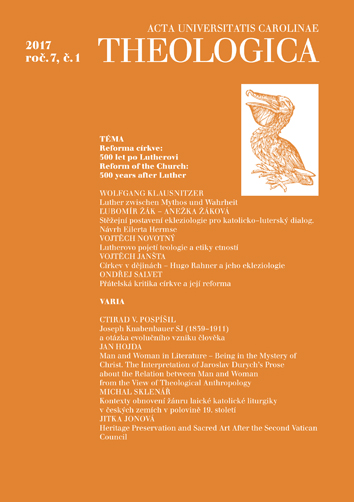 Summary/Abstract: The purpose of this article is to convey an authentic portrait of Martin Luther as a church reformer. In its first part, this paper deals with history. The author classifies the story of Luther’s publishing of indulgence theses in 1517 as a grounding myth of the protestant church and also points out its catholic counterpart: the anti-myth or ‘defence-myth’, namely the accusation that subjectivism, pantheism or atheism are fruits of reformation and especially of Luther’s teaching. The author then briefly informs about the enormous amount of relevant literature which is due to the complexity of Luther’s personality and goes on to describe the changes in protestant and catholic views of Luther over the time. He makes an interesting point in showing the reciprocal dependence of protestant and catholic notions: as soon as the Lutherans started to criticize their reformer, the roman-catholic theologians discovered unexpected similarities between his teaching and their own objectives. In the second part, looking towards the Jubilee, three major opinions of protestant origin are discussed: that Luther was a pioneer of modern social achievements (Thies Grundlach); that today’s situation of Christianity is definitely not what Luther would want to achieve (Heinz Schilling) and eventually an opinion that praises Luther as a moving force to promote freedom in history. Eventually, five questions or proposals are formulated, namely: 1. What are we to celebrate? What exactly has happened on October 31, 1517? 2. Would it be more appropriate to celebrate a Christusfest instead of pushing the man Luther in the front? 3. All churches, e. g. Anglicans should be involved in the celebrations. 4. Christians should connect their belief in the relevance of the past (Gospel news) with the plausibility to the present (as a gift from the Holy Spirit) in order to be able to reach out to the future. 5. It is necessary to take Luther serious, i.e. together with him to pose questions to the whole corpus of Scripture. This also includes the art to distinguish relevant Luther’s ideas from those of his notions which are bound to the past.