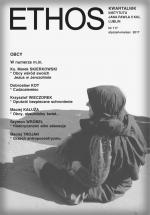 Summary/Abstract: The article discusses the publications by Stefan Sawicki (a scholar born in 1927) on the idea of the Catholic university. According to Sawicki, the most important issue in this fi eld is the relation between science and faith (ratio et fides), and the resulting question about the university’s identity, in particular about the marks of a Catholic university. The other issues, such as procedures of giving names to Catholic universities, their research fi elds, the proper size of a Catholic university, and the balance between the university’s openness to ‘others’ and its guarding its identity, stem directly from this crucial issue. While Stefan Sawicki’s writings will not provide a ready-made answer to the question of how a Catholic university should be structured or how it should function at a given time in history, they may inspire a “reflection and debate on what the university of this type should (and can) be like today, in particular in modernday Poland” (Stefan Sawicki, On the Catholic University, Lublin: Towarzystwo Naukowe KUL, 2012, 8). Sawicki adds: “It might be commendable not to limit the debate in question to the general formulas of the Catholicity of a university, but rather to point how the Catholicity in question should be implemented in the academic practice” (ibidem). The questions raised by Sawicki pertain to an issue which cannot be disregarded also outside the scope of his work.