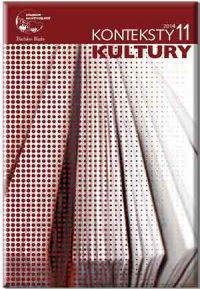 Summary/Abstract: The article is devoted to poems by Kazimierz Wierzyński written during World War I, and published in the volume The Great Bear, 1923. During the war the poet served in the Austrian army and was taken prisoner by the Russians; in 1915–1918 he stayed in a POW camp in Ryazan. There he met Yelena Maslova, who he fell unhappily in love with. In this unhappy love the author of the article tries to find the key to understanding the analyzed poems. They were created at the same time as the vitalistic verses from the volume Spring and Wine, but are kept in a completely different, pessimistic tone. In his detailed analysis of poems “A Letter Home” and “To My Mother,” the author uses anthropological works concerning home (Mircea Eliade, Gaston Bachelard, Martin Heidegger) and findings of Sigmund Freud’s psychoanalysis, and thus, on the basis of the biographical context, he demonstrates that the unrequited love of the young poet was related to the lack of maternal love in early childhood.