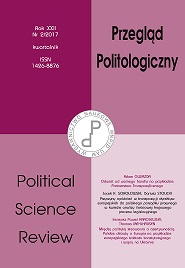 Summary/Abstract: The aim of the article is to analyse how political competition at the local level in the Opole Voivodeship is organized; whether local actors effectively compete with political parties and whether the final result fits into the specifics of election at the subnational level. For this purpose, a statistical analysis of the results of the local government elections in 2014 was made. We take into account party election committees and the German Minority Electoral Committee, which we treat as a proto-party. Both the number of candidates and the number of elected councilors and mayors, were analyzed. The most important findings are as follows: local government at the voivodship level is currently strongly party dependent in the Opole region. At the district level, the largest number of candidates are registered by political parties. In total, 246 district councilors (including Opole), 127 seats received candidates from the party committees. In the elections to the communes over 20 thousand of the inhabitants, the percentage of seats of party-dependent councilors was 34.2 percent and in the village communes (less than 20 thousand of the inhabitants) – 13.6 percent.