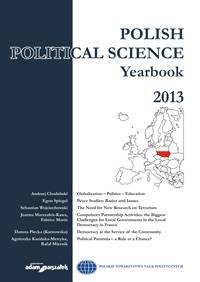 Summary/Abstract: The author undertakes to discuss the problem of rivalry strategies of political parties in elections to the Citizens’ Assembly of the Free and Hanseatic City of Hamburg. The broadness and multidimensional character of the subject area requires moving beyond the limits of political science and entering other related domains, like broadly-conceived historical sciences, also reaching for a number of establishments within legal-historical domains. Firmly grounded historical, legal, polity-related and political aspects of the unification of Germany in the context of German federalism, encouraged and obligated the author, to attempt to bring the above problem up to date. I think that thanks to a broader analysis of elections to the Hamburg Citizens’ Assembly over the last 50 years, the real state of the problem area can acquire a fuller context, with an emphasis on the foundations of local government functioning. To prepare this paper I made use of Polish and German sources published by Polish, American and German researchers. Polish and German literature offered a valuable source to become acquainted with the history and the foreseeable future of Hamburg’s local government, in particular – the assumptions behind territorial and functional reforms, the evolution of which we have been able to follow in the Federal Republic of Germany since the 1970s.