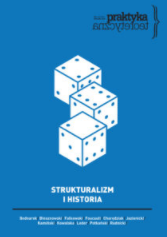 Jeśli mówić prawdę, to tylko w Sierpniu. Etyka jako polityka
Speak the truth, but only in August. Ethics as politics

Summary/Abstract: In the following article I would like to join my voice with Jan Sowa‘s attempt to recoup the phenomenon of the ― Solidarity movement for the left. At the same time I would like to make a similar venture to recoup the "late" thought of Michel Foucault. Whereas concepts such as discipline and biopolitics, the method of genealogical analysis of the relations of power, and even a concept of the entrepreneurial self, have been already adopted by the left, the considerations centered around issue of "the care of the self and the others" are treated usually as a curiosity. This silence has been used by the liberal commentators of Foucault, as well as a foundation for the neoconservative project of Peter Sloterdijk (whose core was presented in an extensive essay You Must Change Your Life). It is all the more worrying, since Foucault saw the most important point of resistance to neoliberalism precisely in the ethics of the Self. The analysis of the events of Polish August ‘80, carried out in the following text by means of some of the concepts developed in 1980–1984 by the French philosopher, is also an attempt to indicate usefulness of these concepts for the revolutionary practice and theory.