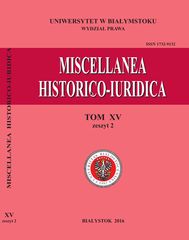 Summary/Abstract: The article describes the views of a number of selected Polish scholars-lawyers on the Nazi government and law during the period 1933-1939. It presents, in turn, opinions on this subject matter formulated by Maciej Starzewski, Waclaw Makowski, Konstanty Grzybowski, Andrzej Mycielski, Ludwik Krajewski, Tadeusz Bigo, Leon Halban, Stanislaw Golab, Leopold Caro, Ignacy Czuma, Marian Z. Jedlecki and Zygmunt Cybichowski. Almost all of them expressed strong criticism concerning the governmental system and law of the Third Reich, usually correctly commenting on and characterizing changes occurring in those fields in Germany since 1933. In particular, Polish inter-war scholarslawyers emphasized the unitary and authoritarian, or even totalitarian, model of the Nazi government and the special systemic position of the supreme leader held by Adolf Hitler. With respect to Nazi legal doctrine and the legal system founded upon it, they pointed out its reliance on racism and nationalism, its refutation of the fundamental assumptions of Roman law, legal positivism and the ideology of natural law, the obliteration of the demarcation line between public and private law and the adoption of the principle of the primacy of common good (German national community) over individual interests. The analyzed discourse on those matters accentuated legal nihilism, decisionism and voluntarism (considering them to be typical of Nazism) and considered those approaches to be inimical to the modern tradition of Western-European legal science.