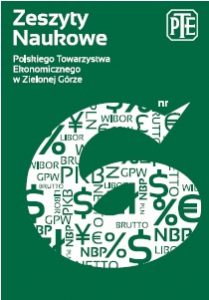 Czy warto rezygnować z OFE? Stopa zwrotu i ryzyko kapitałowej części systemu emerytalnego w Polsce w latach 1999-2013
Is it worth abandoning OFE? The rate of return and risk of the capital of the pension system in Poland in the years 1999-2013

Summary/Abstract: Open Pension Funds are one of the three pillars of the Polish pension system which was reformed in 1999. Monthly dues collected from the remuneration are to be the capital invested by the Fund, mostly in treasury bonds and shares listed on the Stock Exchange in Warsaw.The functioning of the funds on the capital market can be associated with both the probability of short-term decline in the value of contributions, as well as a long-term increase in value.Since 2014, Open Pension Funds have become an unsolicited instrument. Everyone who works and makes contributions can decide whether he wants to use the services of the fund.Changes in the system of Open Pension Funds have raised a number of questions and created controversy over the future of the capital pension pillar in Poland. The main objective of this study is to verify the differences in rates of return created by Open Pension Funds and attempt to estimate the risks to the capital of the pension system in Poland. According to the aforementioned defined aim of the study hypothesized research, the hypothesis of this paper states that from the point of view of a customer, the choice of an open pension fund is irrelevant in terms of its profitability. The hypotheses of the study were verified through the use of linear correlation analysis, linear regression, ANOVA and tests for normality distribution of rates of return funds. The scope of the research covers the years 2000-2013.