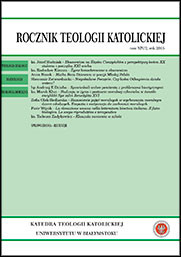 Summary/Abstract: Over the years from 16th century up to our times, Protestants, Catholics and Jews lived peacefully together in the region of Cieszyn Silesia. At the beginning of the third millenium one can follow the words of the Swiss Reformed theologian, Karl Barth, that “although we believe otherwise, we don’t belive in another God”. According the the words everybody’s religion and values must be respected. Cieszyn Sliesia has always been associated with everything what is Christian. For centuries it has been the cradle of faith and the love for God. Cieszyn, as the capital of the region, is a town in which ecumenism – not the theological, but the everyday, practical one – makes sense of people’s lives. Due to historical conditions, this land was rich in clergy and lay people for whom the welfare of other human beings, help for those in need, the social, economical and intellectual developement of the capital town were matters of overriding importance. Today – tradition, history, cultural and intellectual heritage connected with this town speak clearly to everybody. The inhabitants of this land value in a really special way the great gift of unity which was given to them in the spirit of God’s love. No social or cultural activity is impossible here thanks to the true engagement of Catholics and Protestants who are motivated by the idea of developement of this magic place. In Cieszyn Silesia, where “ecumenism is the matter of social life”, the ecumenical awarness is more and more promoted. It can easily be said that the region, in terms of its ecumenical activity in all its dimensions (spiritual, intellectual, pastoral and practical), could be a guiding light for Europe.