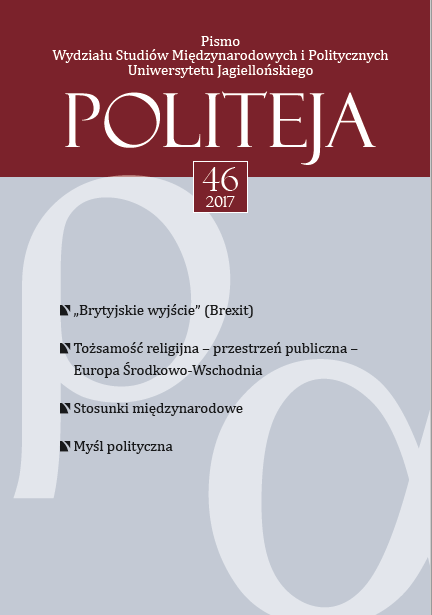 Summary/Abstract: For the last few years, a slow process of a specific “cooling down” of religious and Church commitment has been taking place in Poland. In this article we assume that religiosity with institutional protection still plays an important role in the Church landscape of Polish society and the sphere of public life. In Poland, a positive attitude vis‑à‑vis the Catholic Church is an important determinant of one’s religiosity. Individuals who do not have confidence in the Church, and who evaluate it negatively as an institution, tend to participate less in religious practices, and their faith seems to be weakening. Religiosity and commitment to the Catholic Church in Poland are very closely related to each other. There are no major discrepancies in the opinion as to the extent of the secularization of society among Polish sociologists, but there are differences in the assessment and understanding in terms of the social role of the Church. Discussions on the position and role of the Catholic Church in society still go on, and we are far from a conclusive diagnosis, especially regarding our understanding and acceptance of a “model Church” that should function in a democratic and pluralistic society. The final answers remain in the realm of hypotheses and assumptions. The majority of Poles are convinced about the Church’s influence in various spheres of public life, including the political sphere. This view is predominant among almost two thirds of adult Poles, but also among the youth (even to a somewhat greater extent). This means that the Church is perceived by part of Polish society as a quasi‑political institution, or at least one that attempts to fulfill political functions. This view, which is quite popular among Poles, has been maintained at a relatively stable level since 1989. Among those who believe that the Church takes up too much space in the public life of Poland are found those people in whom every reference to public matters results in a rejection reaction, as well as among those who take on a moderate attitude, who consider that it would be better if the Church were less involved in matters of public life, particularly political. Most Poles accepts the principle of separation of Church and state, even though close to half of those surveyed have nothing against authorities who follow the Catholic social teaching. The views of many Poles on the place and role of the Church in the public life of the nation are to a certain extent ambivalent, and even inconsistent and incoherent. A major subject of public controversy is the presence of religious symbols in public life space, although most of Polish society speaks about such symbols with approval.