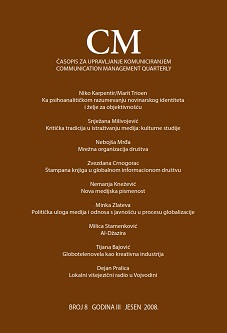 Summary/Abstract: Cultural Studies are among the major fields within the recent Critical Media Studies. It is a title for a very diverse ‘discursive area’ comprising set of theories and practices on the crossroad between humanities and social sciences. Their popularity and influence begins with the esablishment of the Center for Contemporary Cultural Studies (CCCS) at the University of Birmingem in 1964. Althoug dominated by their british origin, in the course of several decades, especially during the directorship of Stuart Hall (1969-1979), they became intensively internationalized as their recognition spread well above anglo-american world. This essay maps out the crucial contribution of Cultural Studies to reinterpretaron of contemporay culture and media. Sevral important breakes with the mainstream communication studies are singled out as their constitutive theoretical moments: ‘redivsovery of ideology’, politics of the popular and significance of popular culture, media contribution to hegemony, and new approach to aduences as stipulated by te ‘preferred reding ’ model.