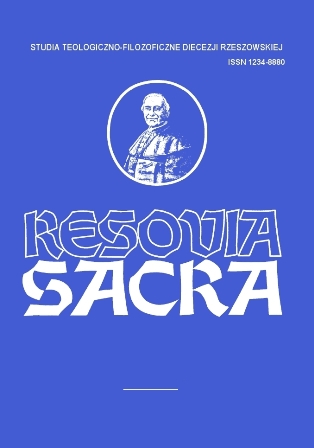 „USŁYSZAŁEM JEDEN GŁOS OD CZTERECH ROGÓW ZŁOTEGO OŁTARZA, KTÓRY JEST PRZED BOGIEM” – W KRĘGU FENOMENÓW DŹWIĘKOWYCH APOKALIPSY ŚW. JANA
“AND I HEARD A VOICE FROM THE FOUR HORNS OF THE GOLDEN ALTAR WHICH IS BEFORE GOD” – IN THE SPACE OF SOUNDS IN THE BOOK OF REVELATION

Summary/Abstract: The sentence fwnh.n mi,an evk tw/n Îtessa,rwnÐ kera,twn tou/ qusiasthri,ou tou/ crusou/ tou/ evnw,pion tou/ qeou/ is only in the Book of Revelation. There is no precisely information about the source of that voice nor in what way it’s unite with the altar. More: Rev 16,7 describe the altar as speaking one. The biblical meaning of qusiasth,rion connected it with God, His carries of men, cult, His – and human desire of meeting. Also the altar’s horns were signs of God’s power, directed to securing the world. The anointing them by the blood of sacrifices symbolized entrusting, offering the whole life to God. All of these thoughts and the context of Rev 9,13 proclaim that God take the human sacrifice, describe before and overwhelmed problems of the world and more: every human in every condition. He is an active and even the evil is under His control, so He – like an altar in the Old Testament – is a city for escape. The motive of voice suggest that it’s connected with the process of communication between God and men.