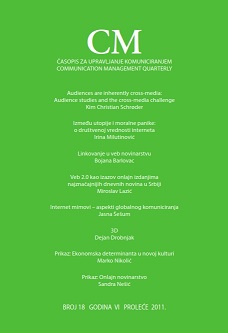 Summary/Abstract: This work analyzes the presence and usage quality of Web 2.0 technologies in creating online editions of the most important daily newspapers in Serbia. Understanding the fact that internet represents the medium which constantly evolves, above all due to new technologies, newly designed applications and the very architecture of the internet itself, we analyzed the state of being of the online editions of the Serbian mainstream daily newspapers (Press, Večernje novosti, Blic, Politika and Danas). Analysis is done in the light of newly developed internet technologies, various in forms and essence, but technologies which can be collectively named as Web 2.0 technologies. On the basis of the analysis of current conditions we pointed out insufficient level of usage of various, above mentioned, Web 2.0 possibilities in creation of online editions. These possibilities for improving quality of online content of daily newspapers are numerous, and they have been already used by majority of the mainstream daily newspapers worldwide. These Web 2.0 technologies can help in increasing the level of online users, which can be a way of generating fresh profit from online marketing. By doing so, in a long run, daily newspapers in Serbia can count on survival in harsh competitive surrounding of information portals and web sites.