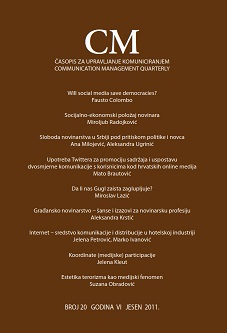 Summary/Abstract: In this text we considered some of the most important and intriguing aspects of contemporary internet, like Web`s influences on cognitive and intelectual capabilities of Net`s users. Finding a starting point in Nicholas Carr`s essay Is Google Making Us Stupid?, with this text we also take into considerations actual and very lively debate which is taking place both within scientific circles (scientific magazines and blogs) and public domain (popular magazines and blogosphere).Current debate was initiated by previously mentioned Nicholas Carr`s essay as well as with his latest books on issues from domain of societal consequences of digital technologies usage. Making parallels between two intelecuatlly confronted arguments of the actors of debate, we tested Nicholas Carr`s arguments that present Web with its form, content and given societal context in which its development has negative effects on further development of user`s cognition. At the same time, Carr is emphasizing that Web is seriously changing cultural framework of learning based on “deep reading”, something that was creating for generations in past centuries. Thanks to that framework science and cognition was possible to develop. Carr argues that Web not only shatters our focus, deep and creative thinking but permanently rewires our brains. This conclusion is further discussed along the arguments that big IT companies, such as Google, are the ones who are playing dominant role not only in shaping contemporary Web but users behaviour on the Net.