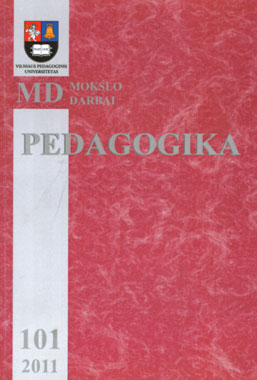 Summary/Abstract: The article focuses on one of the most significant theories from the Lithuanian intellectual heritage, namely, the conception of education, elaborated by the great philosophers and educationalists of Kaunas University from the period of the first Lithuanian independence, the greatest contributions to which have been made by professors neotomists from this university, such as A. Dambrauskas- Jakštas, P. Dovydaitis, S. Šalkauskis, and, certainly, by the youngest graduates of this university, by will and force of destiny turned also into the first emigrants to the West Germany and USA, namely, A. Maceina and J. Girnius. The article also presents the substantiation of the view that it would be A. Maceina and J. Girnius who supplemented the above-mentioned educational conception of integral personal upbringing elaborated by S. Šalkauskis, with essential philosophical and worldview attitudes which in this article, as is clearly visible from its title, are defined by ethical and metaphysical notions of educational theory by A. Maceina and J. Girnius. These intentions were made especially prominent in discussions by A. Maceina and J. Girnius of the educational, cultural and philosophical issues of the national survival in emigration, whereby their importance to the historical national vitality is particularly emphasized and promoted. In the article, the antique idea maintaining that homines historiam ignari semper sunt pueri.