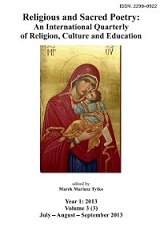 Summary/Abstract: This study is the original article on Ireneusz Iredyński’s drama Żegnaj, Judaszu (Goodbye, Judas) published in 1965. Its aim is a case study of an apostle and traitor, whose modern theatrical shape has been moulded by an outsider playwright, Ireneusz Iredyński. The article indicates that the device alone of placing a biblical figure on stage does not necessarily mean exploring the sphere of the sacred. Iredyński’s “traitor” is a universal character that bothers conscience in every epoch, regardless of professed religion or declared atheism. This study places the issues or faithfulness and treason, of being a scapegoat and seeking redemption, in the centre of attention. The protagonist of Iredyński’s drama is a modern Judas — a forty-year-old man who on his father’s whim bears the fatal name of the apostle and traitor. The name “Judas” brings with it a com-plex, or even obsession of Judas. It is actually the only goal in the character’s life — Judas wants to prove to everyone around that he shall never commit treason. Despite adversities, he wants to remain faithful until the end. In Iredyński’s version, Judas, who is involved in underground activity, does not want to betray his Boss, heading an unidentified opposition organisation. The realities in Iredyński’s play reflect the times of the 1960s terror in the People’s Republic of Poland, but they can also be viewed as a more universal picture of totalitarianism. The fate of Judas, however, is stronger than his wish to be faithful. Judas betrays, standing alone against the violence of the enemy system (represented by the Commissioner, but also by the Pale Kid, who turns out to be an agent) and the sadism of “his own” men (Peter). Judas’s failure consists in his excess trust in words. (this idea was stated earlier) Judas tries too hard to “test” himself. His self-analysis leads to suicide. He cannot leave the vicious circle ruled by his childhood’s demons. His illusion of faithfulness leads to a disaster, and service to a cause, which is an illusion and ends in defeat. Results of studies on the drama Żegnaj, Judaszu — both the psychological and political sphere of the drama, and moral and religious issues (thirst for the sacred) hidden in the work’s deep structure — make a good starting point for further research on various aspects of the sacred realm in Polish literature from the communist era. In addition, it is beneficial for studies of all Iredyński’s works (poetry, prose, drama, radio and TV scripts), and above all, of the “Judas case” in the modern world. The issues of faithfulness and betrayal, truth and lies, are some of the most fundamental questions for humanity. They awoke interest of psychologists, sociologists and political scientists (e.g. the issue of vetting), whom literature provides with archetypal models and allows to find the right answers.