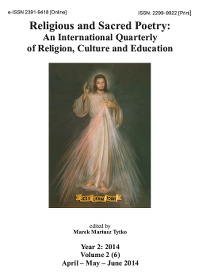 Summary/Abstract: The present article is an original study devoted to The Book of Disquiet written by Fernando Pessoa – a Portuguese modernist author. The aim of the article is to present the work of this “recluse from Lisbon”, who signed his texts with pseudonyms. The scholars claim that Pessoa used 70 heteronyms, that is literary doubles that cannot entirely be identified with the author. Thus The Book of Disquiet is announced by Pessoa as the autobiography of Bernard Soares. The article shows that it is impossible to separate the true “I” of the writer from a specific ironic game he is playing with the reader. For Pessoa, novel-writing seems to be an antidote against loneliness and existential pain (like in the works of Kafka, Heidegger, Camus or Beckett), although putting his private philosophy of life into practice is not an easy task. Pessoa’s book is intentionally chaotic and incoherent – like real life about which the writer – as Bernard Soares – bitterly remarks : “I don’t believe in anything, I have no hope, nothing evokes my pity”. The present article focuses on the problem of loneliness, dreams and longing for a sense in life and makes use of semiotic and comparative methodologies, employed by the researchers from Lublin Catholic University. The main character of The Book of Disquiet is an inhabitant of Lisbon who creates his own theatre of dreams. His philosophy of life is full of agnostic doubts. “Life is not necessary – writing is necessary”. What matters is what has been written down. But even literature does not provide us with quietude, as it cannot quench our thirst for getting to know the truth. In literature everything borders with incertitude, everything is constantly being held in abeyance, without a possibility of being finally verified. On the one hand, Pessoa is a genius, comparable – in the opinion of Antonio Tabucchi – from the point of view of greatness and complexity with the most eminent authors (Nietsche, Pound and Celine, Bataille and Kafka), on the other hand, however, he is a common, tired and bored passer-by who likes walking in the streets of Lisbon. Pessoa’s reflections lead to the verge of absurdity: this is the best place for a man in the armour of a masochistic Don Quixote to throw down the gauntlet to nothingness. The only alleviation to the pain is Lisbon – hence The Book of Disquiet becomes a praise of the city, a literary monument to Lisbon. The results of the research on The Book of Disquiet provide a starting point for a more general search, the aim of which would be a diagnosis of the spiritual state of the post-modern man. With his original theory of loss, spiritual disorientation, inner chaos and indefinable condition, Pessoa the modernist provides a perfect model for analysis which might help in the diagnosis of contemporary spiritual problems. So far the researchers have focused mainly upon a reconstruction and preparation of Pessoa’s work for the circulation among the readers.