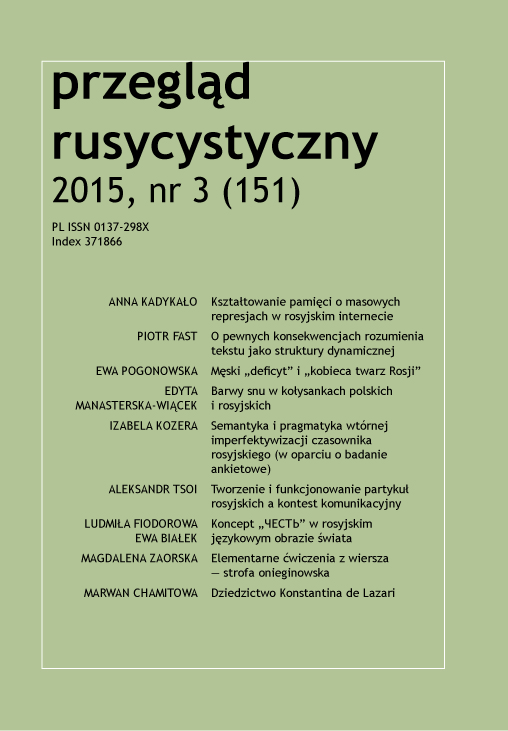 Summary/Abstract: The authors propose a cognitive description of Russian concept ЧЕСТЬ as it is perceived in the Russian worldview. The concept is based on the lexicographic resources, modern texts and a written quiz of students. Russian dictionaries record a semantic shift of the original meaning in the lexeme ЧЕСТЬ from its external aspect (‘homage’) to the internal one (‘conscience’) which took place in the 19th century. The modern comprehension of the Russian concept ЧЕСТЬ also focuses on the inner human qualities such as dignity, morality and inner strength. The semantics of ЧЕСТЬ is revealed in a thesaurus description that is formed by valence bonds of the lexeme ЧЕСТЬ in different combinations and is illustrated with examples from modern fiction and media. It is demonstrated that the concept is realized in two frames: ceremonial and actional, the first is appropriate for its external semantics (“homage”), while the second — for the internal one (“conscience”), which presupposes doing one’s duty, defense of Motherland and maintenance of self-esteem. The quiz among students shows their great estimation of the inner aspect of Russian concept ЧЕСТЬ and their choice of lofty examples among real personalities and relatives as well as book and film characters.