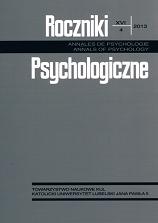 Summary/Abstract: The point of departure for the remarks made in my text is Katarzyna Sikorska’s paper, opening a debate on ethical issues involved in the profession of psychologist. The paper itself is, in my opinion, a solid presentation of these issues as they appear in international and Polish codes. Against this backdrop, my remarks concern the situation in Poland. They describe this situation as advanced disintegration of the community of Polish psychologists caused by the weakness of Polish Psychological Association (PTP) and by the failure to take into account the cultural rootedness of most treatments used in psychologists’ work. The latter remark refers to the failure to take into account both the cultural identity of clients and the cultural rootedness of products imported into the country.