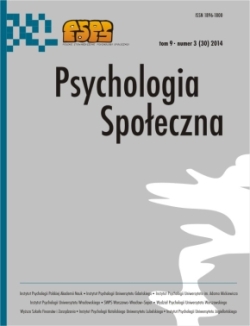 Summary/Abstract: This paper presents results of a three-wave study conducted during Euro 2012 championships on the sample of Polish football fans (n > 700). The focus was on emotions associated with performance of the Polish team. These emotions were analyzed and measured in a temporal order as anticipatory excitation, emotions experienced during the game, and in regard to the post-game results. We have proposed a three-partite structure of sport-related emotions: intrinsic, ingroup identity and inter-group feelings. The latter was relevant with respect to the Poland vs. Russia game. We assumed that Polish-Russian prejudices should affect the anticipatory excitement before the match and, next, the outcome-related feelings. The study was run through the Internet, immediately after each of the three games (with Greece, Russia, and the Czech Republic) played by the Polish team in the group phase of the tournament. Collected were measures concerning the just ended game and those anticipated in few days ahead, as well as those concerning representation of bilateral relations, and attitudes towards Russia. The findings confirmed the central hypothesis. Initial measures of russophobia affected the level of anticipatory excitation before the game, which in turn regulated the intensity of outcome-related emotions: defeat and victory (reported as counterfactual events). Russophobia also predicted the level of defeat-related emotions. Finally, russophobia did not predict the draw-related emotions. Draw was the real outcome of the game, and the level of satisfaction with this score depended on positive evaluation of the championships organization and its opening. Contrary to emotional seizure following victory or loss, draw released emotional restraint and self-control. The same profile manifested itself in coping with the final defeat of the national team in its game against the Czech Republic. To sum up, intergroup prejudice affected sport emotions, yet this relationship was restricted by the outcome of the game and depended on the category of opponent.