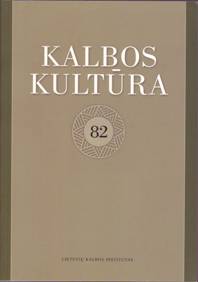 Summary/Abstract: Social and economic changes exert influence on the language of children and adults as well as its development. A deteriorating language urges to seek reasons and raise new questions: when and how children should start learning a foreign language, which factors should be taken into consideration to achieve better results, and what impact a foreign language has on one’s native tongue. Most apprehensions on early foreign language teaching/learning are concerned with itsnegative influence on one’s mother tongue. In Lithuania there has been hardly any research done; research conducted in other countries has not confirmed any of the apprehensions. The negative impact on one’s native language can only be discussed in reference to the language loss and deterioration noticed in the language of immigrant groups who have lived in a foreign country for a longer time. On the other hand, there are numerous advantages of the early language teaching/learning: acquisition of values, development of tolerance and culture, acquisition of general skills concerned with cognition and thinking, memory and attention. The research has shown that foreign language learners tend to acquire more linguistic competences than those who only know their native language. It is important that the advantage is also seen in the better results of the native language learning, for example, in the usage of complex sentences or better reading skills. Moreover, a positive effect in the opposite direction has also been noticed when one’s mother tongue helps develop foreign language competences, since there appears a possibility to compare two different language systems.Studies of foreign researchers help find answers to all questions raised in the paper, because in Lithuania there is an obvious gap in the research on early language acquisition. Specialists of Vytautas Magnus University together with their colleagues from Croatia and Italy are currently working on a project aimed at filling in the gap and possibly providing answers to the key questions in the area.