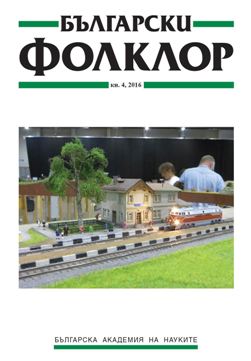 Summary/Abstract: The article discusses the morphology of Otherness in the Bulgarian meta-narrative in regards to the empirical case connected to the concept of the Tatars in the minds of Bulgarians in the late 18th and in the 19th century. Тhe text analyses the Tatar topoi in the Bulgarian folk songs, in historiography and in 19th century Bulgarian literature. The Bulgarian national narrative enriches the morphology of Otherness by incorporating heterogeneous Tatar images as variants of stereotypical notions of the abductor. Some mythologems associated with archaic layers of human culture and forming a folklore-mythological matrix of understanding foreignness are recreated. According to the the data from the Bulgarian folk songs, there is no independent Tatar subject, the Tatar topoi are incorporated secondarily into the song motifs, connected with abduction. These are heterogeneous elements, whose primary objective is to maintain a “sense of history”. Such mythologized images were present in written texts in the late 18th and in 19th century thus supporting the Bulgarian “great narrative” that legitimized the preliminary design for the creation of the nation. Since the middle of the 19th century due to the empirical experience of direct communication Tatar emigrants have gradually been discovered in their natural human form while their activities have left durable traces in the local memory and heritage of the region.