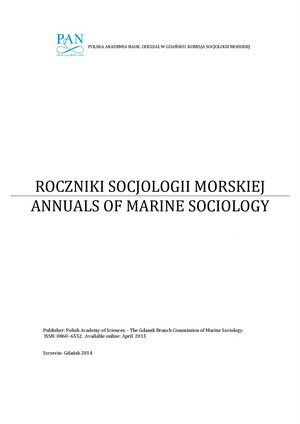 Summary/Abstract: Social network of the population of West Pomerania, which is a part of the people of the sea, has a heterogeneous character in both – the structural and functional perspectives. The greater part of Szczecin inhabitants, the regional capital, is derived from the poorly urbanized areas and is not prepared to live and work in the port city. The theoretical and empirical basis for discussion in the article are the Author's own research and 70 years of scientific achievements of sociologists from West Pomerania. The article consists of three parts. The first discusses the problems of adaptation and migration to the new socio-cultural environment. The second part presents the process of formalization and institutionalization of sociological circles. Here began the first research and publication attempts. The third part is the university phase, which continue researches started earlier on people of the sea and littoral and extend it on international issues, published in own scientific journal Annuals of Marine Sociology and in other national and international publications and also in the “Szczecin Encyclopedia”, released on the issue of the 70th anniversary of the Szczecin City.