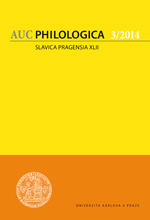 Summary/Abstract: The aim of the article is to analyze present forms of the verb byti “to be” in Baroque Czech. The author analyzed data given in old grammars of Czech, diachronic corpora and a personal corpus of Baroque Czech texts. The author found that: 1) the analyzed texts contain just one dialectal form (2. ps. sg. seš “you are”), 2) the distribution of the short form of the 2. Ps. Sg. s “you are” is not restricted to the auxiliary function, 3) the main form of 3. Ps. Sg. is jest “he/she/it is”, while the form je is rare, 4) the distribution of the initial j is unstable (jsem × sem “I am”, jsi × si “you are” …): only the texts that belong to the high style (such as translations of biblical texts) distinguish between forms including js- in the lexical function and forms including s- in the auxiliary function.