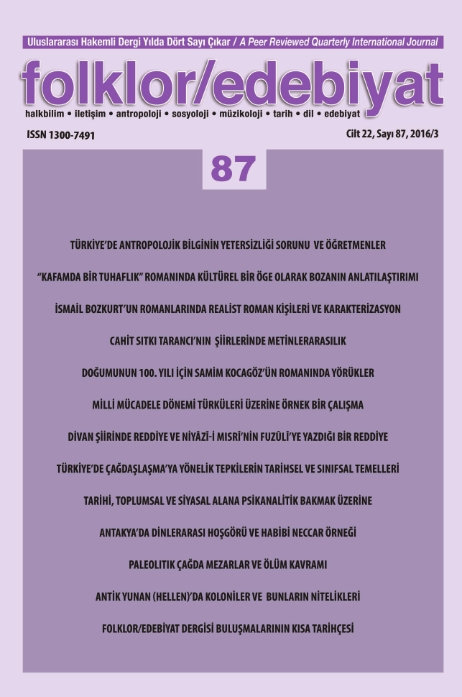 Summary/Abstract: The novel, which emerged in the XVIII century as a result of the interrogation of “realism” in the social, humanity, natural, and experimental sciences and from the sense of selfseeking within the middle class is not distant from social traditions. The center point of Ismail Bozkurt’s literary activities, which are remarkable in this sense, is comprised of his special efforts to institutionalize the novel in Cyprus while aiding in the construction of a national identity. Mr. Bozkurt has a realist novel understanding. Through the characters he creates in his novels, Mr. Bozkurt stands against the fading and the forgetting of the memories pertaining to social and political history. At the same time, he tries to create a community memory containing members from the community who can respond to the questioning of identity by future generations. In his novels Yusufcuklar Oldu mu?(1991), Mangal (1995), Bir Gün Belki (2002) and Bir Gecede (2005), the male characters move with a national consciousness, individual will, and common sense and this provides the opportunity for the social and political structure of the island to be read. This study will shed light on the application and exhibition of realist novel theory using Mr. Ismail Bozkurt’s novels as an example, where the transformation of humans into a social being is reflected through witnessing the concepts of “reality”, “development”, and “maturity” in the realist novel heroes.