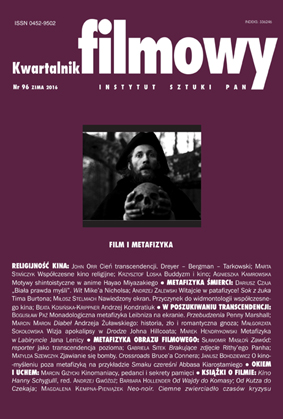 Summary/Abstract: The author discusses the historical, philosophical, and political context of the film as well as the artistic form of Andrzej Żuławski’s ‘The Devil’ (1972, prem. 1988). He also takes into consideration Żuławski’s novel-cum-historical essay ‘Moliwda’ (1974, pub. 1994). ‘The Devil’ brings to mind the romantic notions of history and metaphysical evil. The romanticism of ‘The Devil’ and Żuławski’s artistic method manifests itself in two major aspects. The first concerns the vision of the second partition of Poland (1793). The second aspect is the way in which the historical issues are presented in the form of a film phantasm. Żuławski relies on references to gnosticism, the romantic poetry of horror and frenzy. ‘The Devil’ becomes an expression of an artistic and ethical revolt. The director wanted through his film to create a parallel to modern times. The representation of history in ‘The Devil’ was to become an element of a reflection on the moral condition of the Poles and a voice of protest against the events of March 1968 in Poland. The expressive form of the film and historical and political context prevented the distribution of the film for sixteen years, and Żuławski was forced to emigrate from Poland.