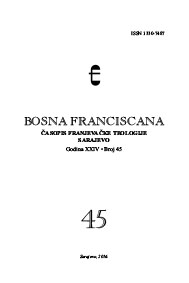 Summary/Abstract: This paper deals with research and critical review of the work of architect Blaž Misita- Katušić in the area of the Franciscan Province of Bosna Argenitna. Misita-Katušić, although in the professional surrounding known for its conservation and restoration projects done at end of his career, primarily in Slavonia and Vojvodina, was earlier engaged in important projects, religious buildings, including those built for Bosna Argentina in Belgrade, Visoko and Petrićevac. The paper presents the architectural properties of these projects and their historical development in later epochs. The additional value of this paper is the presentation architectural drawings of mentioned projects, parts of archive collections, which until today have been rarely or not published at all.