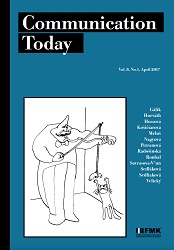 Summary/Abstract: Episodic television drama is currently one of the most popular, profitable and variable forms of audio-visual media production. The author of the study focuses on its ability to appeal to people preferring ‘traditional’ modes of reception as well as to media audiences that spend a lot of their free time in the virtual world. New trends in production of dramatic television series and serials refer to importance of multimedia distribution platforms and fully acknowledge social networks as communication and advertising channels that are capable of actively encouraging the emergence and evolution of so-called “institutionalised fandoms”. The text aimsto offer a set of theoretical outlines related to post-television era, placing emphasis on “brandcasting”, a term that has been developed in order to thoroughly reflect on processes of television branding which often resultin hybrid communication forms merging media content and promotional material. The author also focuses on specific modes of producing, distributing and consuming episodic television drama in the context of so-called “over-the-top” television (OTT TV) or rather “connected” television. The addressed development tendencies are explained through an analysis of successful cooperation between two popular entertainment brands (Marvel Television and Netflix) that is built upon the contemporary ‘boom’ of superheroes and their stories. A basic assumption here is that television drama serials produced by Marvel and exclusively distributed by Netflix can be seen as hybrids of content and promotion which significantly expand Marvel’s global popularity and Netflix’s increasing influence in the sphere of digital media production and distribution.