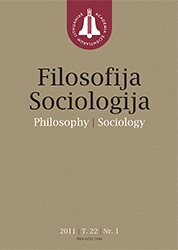 Summary/Abstract: Examination of the attitudes towards Lithuania’s membership in the European Community (hereinafter the European Union) has been started in the first representative public opinion surveys. The Public Opinion Research Center at the Institute of Philosophy, Sociology and Law (Lithuanian Academy of Sciences) began to study this issue in 1991. Since then, many representative surveys have been conducted, and attitudes towards the membership have been changing. Also, motives of supporting or not supporting the membership, a thematic discourse and actuality of this issue in the society have been altering. The dynamics of different aspects of the attitudes is analyses in the paper. The empirical results show that after a strong support of the membership 25 years ago, a period of skepticism followed, and later on the period of optimism appeared again. The latest surveys indicate a high support for Lithuania’s membership in the European Union as well. A high support for the membership before the Euro referendum was not defined by believes in quick personal benefits, but rather by believes in benefits for children in the future and for Lithuania in general. This is one of the reasons why later a disappointment in the membership was not fixed. The support for Lithuania’s membership in the EU has been and remains higher among younger, better qualified people and, inhabitants of big cities.