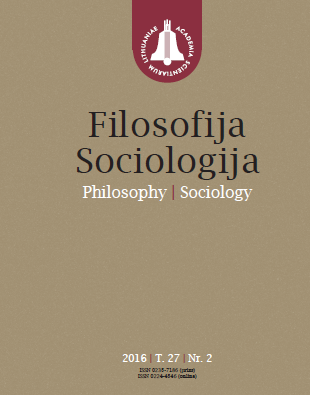 Summary/Abstract: The idea of happiness economy and felicitary (felicitary – Lat. happiness) policy began to form at the end of XX century – at the beginning of XXI century. Sometimes these ideas are named as “happiness revolution”. “Revolutions” cannot proceed without their supporters, so there is an important question: “Is Lithuanian society informed about these ideas and on which level society supports them?”. Looking for the answers to this question, a representative survey of the adult population of Lithuania was conducted. 1,001 respondents in total were interviewed. The survey revealed that 11.0% of respondents had heard/read about happiness economy. A bigger part of them are among younger generation, higher educated and higher income people. In spite of a low knowledge of happiness economy, the majority of Lithuanians (81.1%) support the thesis that happiness of Lithuanian population has to become the main task of the Lithuanian state. Similar results were received during qualitative studies about happiness economy in Lithuania and Latvia.