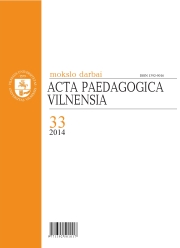 Summary/Abstract: This publication aims to present a theoretical and empirical model of the expression of moral values in 5–7-year-old children as the base for their empirical study; to describe elements of the expression of moral values in children of such age in terms of behavior frequency and self-sufficiency; to compare the behavior of the children by gender and the place of residence. Based on the data of factor analysis, the following values were included into the theoretical and empirical model of the expression of moral values in 5–7-year-old children: dutifulness (clearing-up of the playing area and protection of things belonging to this environment); carefulness (taking care about plants and / or animals); openness (sharing things, toys, etc.); sincerity (telling about himself / herself and giving as a gift self-handmade items, findings); helpfulness (attempts to protect others informing about a danger); sympathy (compassion when it is going wrong); attentiveness (noticing the mood of other persons and listening to what others say); simplicity (avoiding the ostentation of things or appearance) and honesty (attempts to avoid lying, to say truth). Based on the criterion of the behavior expression frequency, the elements of avoiding EXPRESSION OF MORAL VALUES IN THE BEHAVIOUR OF 5–7-YEAR OLD CHILDREN Placida Jasiūnaitė Summary fraud, of honesty, openness, dutifulness, sincerity and attentiveness were reported more often in the behavior of 5–7-year-old children. Dutifulness, attentiveness, sincerity as well as carefulness and sympathy were noticed more frequently in the behavior of girls as compared with boys. Children living in cities were more mindful and sincere, and children from rural areas were more dutiful, attentive, and honest. The behavior of 5–7-year-old children was interrelated and based on the frequency and self sufficiency criteria, except some insignificant differences. Although many of children in this age group strived to avoid a fraud, made attempts to tell the truth, be attentive on their own initiative without the intervening of others, not all attempts were successful. However, data of the self sufficient behavior demonstrated at the same time that children of this age tended readily to perform activities incarnating the values of sincerity, attentiveness, sympathy, and helpfulness. Also, elements of self-sufficient behavior were more distinct in the behavior of girls rather than of boys.