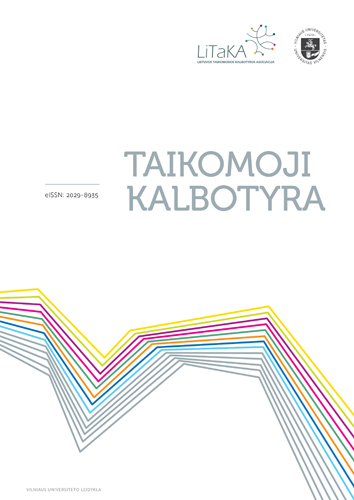 Summary/Abstract: It is not enough just to describe the distribution of linguistic variants in a speech community in order to explain language variation and change in apparent time. It is important to examine language users’ attitudes towards them as well as social meanings attributed to them. The social meaning of vowel lengthening as a relevant feature of Vilnius speech has, however, not been studied. Speaker evaluation experiment was conducted (2014, February–March) in two socially and ethnically unmarked schools with Lithuanian as the language of instruction. The schools were ranked in the middle position in the rating of city schools; all of them were located in two socially unmarked Vilnius neighbourhoods. The experiment aimed at determining the social meanings that vowel lengthening acquires among Vilnius pupils. The total of 231 senior (9–10) class pupils took part in the study. The experiment has confirmed the hypothesis that vowel lengthening in Vilnius speech is not evaluated ambiguously and has more than one social meaning. The articulatory context, i.e. the duration of stressed short vowels in the stem and inflectional ending as well as the cluster of other pronunciation features, that is decisive in which of the meanings is actualized. It has also shown a clear hierarchization of Vilnius speaking styles: 1) Kam+GalLT, 2) Neu, 3) Kam and 4) Kam+GalSL. The study has revealed that if vowel lengthening in the stem of the word and in the inflectional ending occurs in the articulatory context of Lithuanian speakers by origin, it is perceived as a marker of high social status, power, high professional competence of the speaker as well as representing businessman profession, a speaker who could work as a newsreader, hold leadership positions. Personal traits like educated, wealthy, successful, managing, youthful, urban and having a good job have mostly been assigned to the latter types of speakers with statistically significant difference. If vowel lengthening occurs in the articulatory context of the speakers of Slavic origin, it is recognized as Slavic and associated with low social status, linked to services and working-class occupations. In addition, all the above mentioned personal traits of this speaking style have been assigned most rarely by the pupils. Kam speaking style has been linked to provinciality and speakers representing this style have been mostly considered suitable for service occupations.