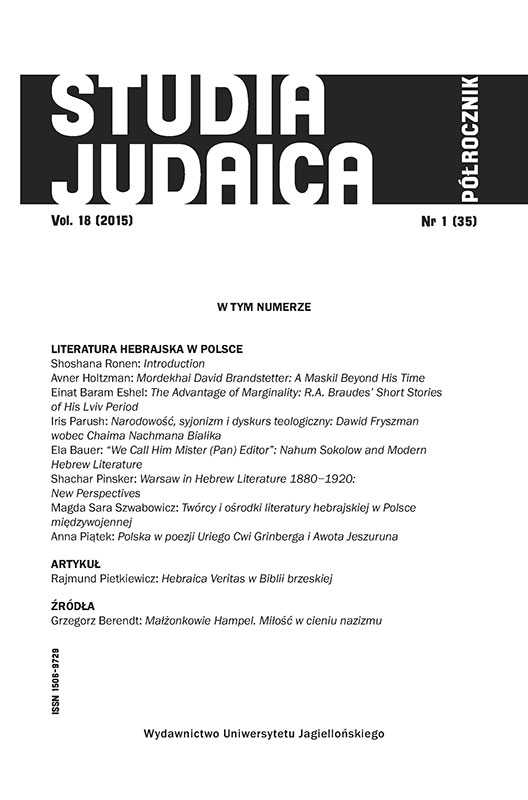 Summary/Abstract: According to a 450-year-old tradition, the Brest Bible is regarded as the first translation of the whole Holy Scripture from the original languages into Polish. The present article deals mainly with the relation between the Brest Bible and Hebrew and Aramaic versions. Even a cursory analysis reveals that the Brest translators generally followed hebraica veritas. Yet, they took advantage of Stephanus’s Bible (Geneva 1556/57), which besides the Vulgate contained a literal translation of the Hebrew Bible into Latin, accomplished by Santes Pagnini. This version made it possible to convey hebraica veritas without resorting to the Hebrew text. In places where there are significant differences between the printed editions of the Hebrew Bible of the 16th century and Pagnini’s version (e.g. Ruth 2:23; 3:15; 4:1), the Brest Bible follows Pagnini. The Brest translators followed Pagnini’s text in Stephanus’s edition verse by verse, adapting the division into chapters and verses to the Polish text. The analysis of onomastics and the system of transcription in the Brest Bible leads to the conclusion that the translators followed the previously accepted principles of proper names translation as well as left some Hebrew and Aramaic terms untranslated. The influence of the Vulgate might have been the result of mistakes which emerged as a result of taking advantage of two Latin versions simultaneously, printed alongside by Stephanus (see 1 Chr 4:2). There are reasons to doubt if the Brest translators were translating directly from the original version. Chances are they translated directly from Pagnini’s version printed by Robert Stephanus. In order to confirm this with all certainty and without a shadow of a doubt, strenuous and tedious research, comprising larger parts of the text, conducted verse by verse, is absolutely crucial.