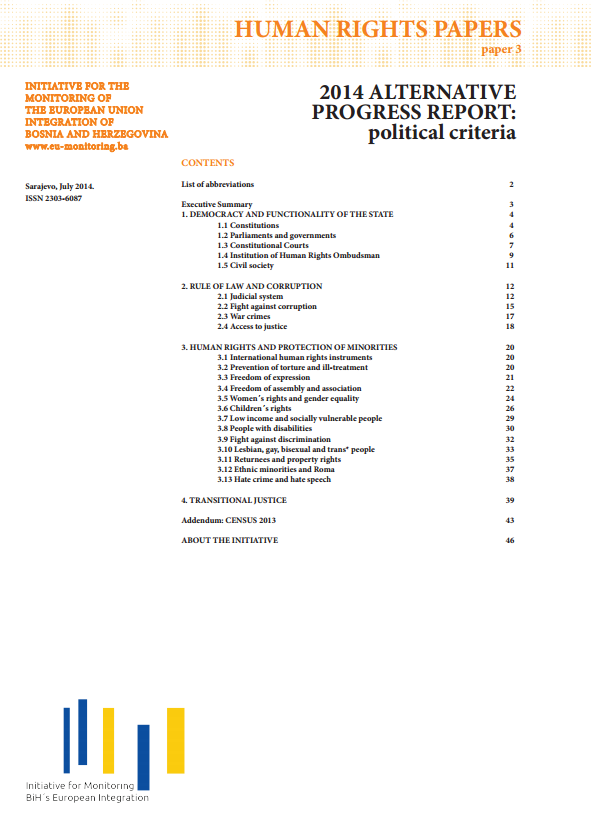 Summary/Abstract: This is the second Alternative Progress Report on Bosnia and Herzegovina’s path towards the EU membership. The report is a joint effort of dozens of individuals and organizations whose common goal was to show the current state of integration of Bosnia and Herzegovina from the perspective of civil society organizations. Having in mind that the official Progress Report on Bosnia and Herzegovina is a political report of the European Commission, we believe that the publication of the Alternative report can affect its content. Because of this, we are publishing this Alternative Progress Report nearly three months before the publication of the official one, hoping that it will have an impact on the formulation of the formal report. The report completely relies on the so-called political criteria, focusing on the following questions: - Democracy and the functionality of the State, - Rule of law and corruption, - Human rights, especially the rights of minorities and vulnerable groups, and - Transitional Justice During the 2013 and 2014, we have witnessed that no relevant progress has been achieved. The process of implementation of the Sejdić and Finci v. Bosnia and Herzegovina ruling is completely displaced from the Parliament. Performance of the democratic parliaments and governments on state, entity and cantonal levels is extremely low. The work of the institutions is characterized as unstable, inefficient and with notable lack of transparency. The decisions of the constitutional courts are still not implemented. No significant and systematic policies to combat human rights violations have been adopted. Judicial reform has been stopped and Structured Dialogue on Justice between B&H and the EU does not show any progress. Not a single significant case of corruption has been processed. Minority and vulnerable groups still live in difficult conditions. Discrimination and violence are all-present, and the law on prohibition of discrimination did not show the expected results, having in mind that five years after the enactment of the law, only two final judgments were passed. Comprehensive anti-discrimination policies for social integration either do not exist, or are almost never applied. Floods additionally hit the most vulnerable groups in society. Furthermore, the most vulnerable groups in society have been affected by the recent floods. The prosecution of war crimes and dealing with the past, as prerequisites for creating a healthy environment and building a common state, represent an additional problem. Political support for war criminals by the leaders of political parties only further divide the already highly fragmented society. We hope that the general elections in October of 2014 (although held by discriminatory rules) will bring more stable political structure, ready to face different problems. Initiative for the Monitoring of the European Integration of Bosnia and Herzegovina will certainly advocate change, in terms of adopting new laws and policies, and the implementation thereof. We also hope that the BiH authorities and the EU institutions will support a stronger representation of civil society within the various forums within the EU integration. Civil society must become the third actor in this process along with the State and EU institutions.