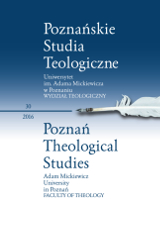 Summary/Abstract: The purpose of this article is to present certain episodes of the acts of war of insurgent army under the leadership of Judah Maccabee, which occurred both before the death of ntiochus IV Epiphanes, the biggest enemy of Jews in Seleucia empire, and shortly after it. The undertaken efforts clearly show that even after the death of the hated ruler the situation in the province of Judah has not changed radically. The insurgents still attempted to free themselves from Seleucia rulers, whose castle in the capital was probably the most important sign of domination. To understand the meaning of the activities of insurgents better one cannot ignore the role that acre played in oppressing the chosen people. The first part of the article mentions that. n important final query, however, is an attempt to answer the question of the author of the book – why did Judah fail to take the fortress, despite undoubtedly favorable circu mstances surrounding it. The article deals with the First Book of Maccabees, which is still rarely commented, as well as all deuterocanonical books, more often overlooked in exegetical discussions than books of the Hebrew Bible.