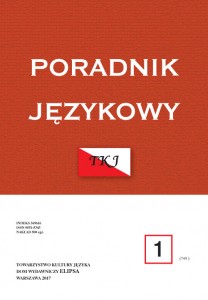 Summary/Abstract: The aim of this paper is to analyse the phraseological layer of the poetic paraphrase of The Psalter in Bohdan Drozdowski’s translation. Published in 2008, King David’s Psalms are an interesting example of dynamic equivalence in the area of translation. They also make an attempt at finding, at the level of the system of the Polish language, specifi c syntactic, semantic and stylistic equivalents of the same values as the original Hebrew text. The purpose of the conducted analyses is to answer the question whether, and to what extent, Bohdan Drozdowski retains the layer of traditional phrases, which are associated with the Psalter style. To what extent his poetic paraphrase breaks with the Polish tradition of translation, which has been developing since the Middle Ages, and to what extent it has remained faithful to it. In Bohdan Drozdowski’s paraphrase, traditional biblical phrases are intermingled with Polish idioms that are abundant with marked colloquial lexis and expressive formations, which permits the conclusion that although the poet wanted to modernise Psalms and adapt them to the mentality and sensitivity of the modern reader, he did so while protecting the layer of traditional phrases. This layer, although slightly depleted in comparison to traditional translations, is noticeable and penetrates deep into the text of the translation, becoming, so to speak, a basis for the innovative ideas of the translator. This intended coexistence of lexical and phraseological layers that are so stylistically and genetically varied is a characteristic feature of the paraphrase in question. In this multitude of voices, the voice of many epochs can be heard, which seems to be emphasised by the timeless character of the Psalter, visible in the Polish language since the mediaeval times. This means that Bohdan Drozdowski’s paraphrase links, as it were, the old times and the modern times and becomes a meeting place of the tradition and the present day.