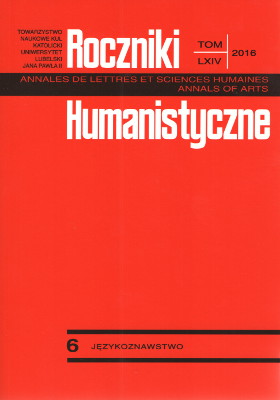 Summary/Abstract: The article focuses on lexical peculiarities of David’Psalter by Mikołaj Rej, that is on these lexical forms which are not present in the 16th-century lexicographic sources or which are present in the dictionaries only on the basis of Rej’s works. Such peculiar lexemes frequently appear in Rej’s paraphrase, usually as synonymic equivalents, or even as word-formation doublets, of lexemes whose position in Polish literature is stable. Various factors decided about whether to include neologisms in Rej’s paraphrase, such as: the desire to strive for lexical precision and word-formation regularity, the possibilities of creating a lexeme and the aspect of versification and rhythm, which aimed at putting together forms created with the help of the same suffix. What helped to choose and accept some neologisms was also the desire to divide these lexemes which occurred next to each other in parallel verses.