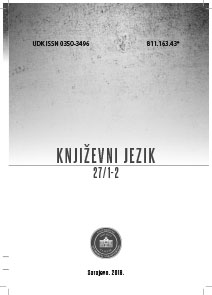 Summary/Abstract: This paper will try to determine whether literary names except individualization, have important semantic, pragmatic, allusive and symbolic function, which can be seen in a holistic perception of a particular literary work. Also, in this paper we will try to discover the mentioned functions in the examples of literary anthroponyms in Bosnian literature, particularly in dramatic texts. Literary anthroponyms, this article will show, can be used artistically (their semantics and derivation can encode a central feature of a particular character), to achieve many targets such as, for example, ideological commitment, or just turn on some of the author’s point of view.