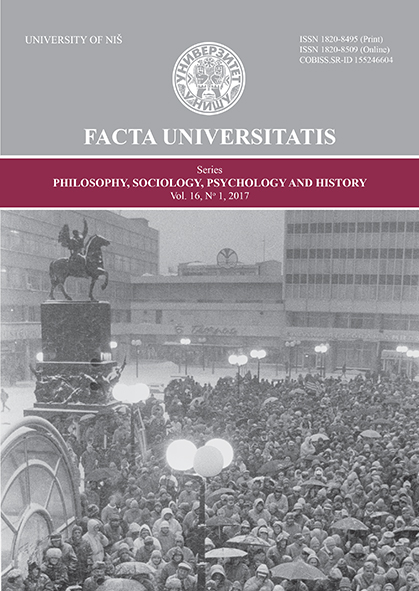 Summary/Abstract: This article discusses the historical changes in religious practices in Bosnia-Herzegovina from the communist era to the post-war period in line with their influence on identity and intergroup (inter-ethnic, inter-religious) relations. There is a lack of evidence on whether people did not overtly express their religious beliefs during communism even though they were covertly religious, or whether they started engaging in the religious practice during and after the 1992-1995 war in order to establish group connectedness, cohesion, and fulfill certain needs. “Bosnian identity” will be described as a puzzle formed by the “remains” of the previous regime and the “new additions” of the post-war period. The discourse of power dominates in Bosnia-Herzegovina and enables prohibitions of different types of dialogue that can lead to better understanding of differences and Other(s). The main problem that will be addressed in this article is the (non)existing Bosnian identity analyzed through “jouissance” of nationalism, intolerance and religion. The contradictions of Sigmund Freud’s concept of identification, and the relation of that concept to the body and power in a post-war divided society will be discussed. We can conclude that the main discourse of power operates with religion in order to establish the “jigsaw puzzle of Bosnian identity”. The presence of those who either live in a different system (yugonostalgic people, Homo Yugoslavicus), or those who do not believe (atheists) simply adds a new dimension to the currently established system which can be used to further explain if the overtly expressed beliefs will remain unchanged in case of the establishment of a new system.