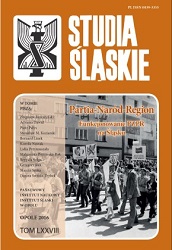 Summary/Abstract: The article presents the changes in railway network in Upper Silesia in the years 1950-1990. In the mentioned period, three main processes of change may be distinguished. The period of the expansion of railway lines, which fell mainly for the years 1950-1980 with varying intensity. Besides the construction of new lines and second tracks, a modernization of technical equipment of the railway lines was undertaken. The period 1960-1990, which included the process of implementing the electrical traction in place of the outdated steam traction and the modern, but expensive diesel traction. The last phase of regression (liquidation) of the railway lines, which indicated the first symptoms in the late 70s of the 20th century, and a significant increase took place already after 1990. The purpose of the expansion of the railway network in the area of Upper Silesia was to enable an increased load of the bituminous coal and its export to the major economic centers in Poland. From the area of the Regional Directorate of State Railways in Silesia, in the years 1950-1990, came half of the loads that were given to the Polish State Railways network. The development of the railway network of the Upper Silesian Industrial Region had to follow the growth of coal extraction. In total, in the area of Upper Silesia and adjacent areas, 454 km of new railway lines and sidings were built, including 285 km of double-track lines, in the years 1945-1990. The ongoing economic recession after 1980, combined with a decrease in traffic, imposed a restructurization the dense railway network in Silesia and a necessity of an efficient usage of the line investments that were realized there in the past.