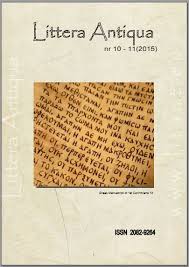 Summary/Abstract: Among all examples of an unique manner of suicide, known as devotio, which occur in ancient sources, the one is especially interesting. It concernes family of the Decii Mures. Three of its members – father, son and grandson – one by one sacrificed themselves and their soldiers during battles with Latins, Samnites and Pyrrhus. It is the only instance of "family" sacrifice among cases listed by Anthony van Hoff – 52 examples of devotio known from ancient times and 21 found in Roman historiography. Livy defined it as familiare fatum, that is the fate destined for a particular family. It means that the Decii became an exemplum to which e.g. Cicero appeals.