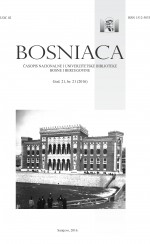 (from Collections of National and University Library B&H)

Summary/Abstract: Bibliography - The Dissolution of Yugoslavia: Press Clipping from Foreign Periodicals is a result of the project realization of the National and University Library of B&H, funded by the Federal Ministry of Education and Science. Through the project it has been planned to publish project results. The subject of this study was press clipping from foreign periodicals which are located at the Department of Special Collections. Among foreign periodicals, which were the subject of the research are: The Times, The Independent, Herald Tribune, The Guardian, The Sunday Times and others. The period covered by the study is from 1980 to 1992. Bibliography has 618 bibliographic units.