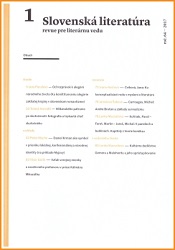 Summary/Abstract: The paper analyzes the importance and place of evangelical bishop Daniel Krman as a symbol in the local (the inhabitants of town Myjava), confessional (Protestants) and national (Slovaks) identity and memory. It examines folk manifestations, literary production and the societies, institutions and public spaces in Myjava that have adopted Krman´s name. The golden age of the institutionalized commemoration of D. Krman may be the first half of the 20th century. To date Krman predominantly functions as a significant confessional symbol, therefore Krmanesque festive culture is also closely related to the clerical and religious life. This symbol was usually pushed out of the context of various secular (public, national) festivals. The literary texts and ceremonial speeches written in the year 1940 (the 200th anniversary of Krman´s death) were marked by the resistance of the Lutheran community to the totalitarian regime of the Slovak State: despite the single attempt at the ecumenical understanding of the symbol, the literary image of Krman as a martyr of the evangelical faith became a tool of petrified confessional differences on the local as well as nationwide level.