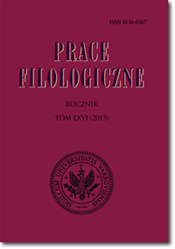 Summary/Abstract: The paper discusses the problem of codifying the reduction phenomena occurring in spontaneous speech. Firstly, the extent to which the phonetic reduction phenomena have been included in the German speech codes as the so-called familiar register within the existing standard. The phonostylistic variants have also been taken into account in several German orthoepic manuals. However, the reduction processes (mentioned solely in the orthoepic dictionaries) have been treated selectively for didactic purposes. It follows that extensive and systematic investigations into the spontaneous speech and pronunciation remain still an open question. The outlined pilot studies have shown that the reduction processes, typical of the low-precision speech phonostyle, also display some regularity and that they are conditioned both by extralinguistic factors and the German language prosodic features.