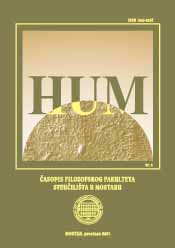 PREGLED KATOLIČKE I HRVATSKE PERIODIKE U BIH OD 1878. DO 1918. S POSEBNIM OSVRTOM NA ČASOPIS BALKAN
REVIEW OF THE CATHOLIC AND CROATIAN PERIODICALS IN BIH FROM 1878 TO 1918 WITH A SPECIAL REFERENCE TO THE JOURNAL CALLED BALKAN

Summary/Abstract: The paper firstly gives the review of all periodical publications in the Croatian language which appeared in the area of Bosnia and Herzegovina in the period from 1878 to 1918. According to some people there are 23 periodicals, but some other mention that there are 29 of them. The author of this article mentions 32 titles, or 43 papers initiated in the mentioned period. The first number is valid if we apply the methodology according to which only one periodical publication is counted regardless of how many times it changed its name and was published under another name. The second number is obtained if we apply the rule that every emergence of a new name of the periodical is in fact the end of one and beginning of the new publication. Not so known theological journal Balkan was presented in the second part of the paper. It was activated by Archbishop Josip Stadler from Sarajevo and was being published twice a year from 1986 to 1902. The main preoccupation of this journal was the reestablishment of unity among Christians, especially between Catholic and Eastern Orthodox Church. But, Stadler’s ecumenical appeals were not productive for the Eastern Orthodox metropolitans and priests of that period.