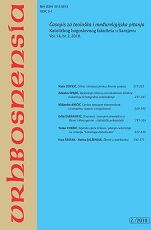 Author(s): Tomo Vukšić
Subject(s): Christian Theology and Religion
Published by: Katolički bogoslovni fakultet
Keywords: document from Lima (BEM); baptism; ministry (office; ordination); Eucharist; banquet of the Kingdom; unification of Christians; elements of what is to belong to the Church; faith and organization; World Council of Churches; liturgy of Lima

Summary/Abstract: The lecture first presents discussion of the Eucharist in reference to the “Lima text” on Baptism, the Eucharist and Ministry (BEM, 1982). Then follows the response of the Secretariat for Promoting Christian Unity, given on behalf of the Catholic Church (1987) at the invitation of the “Faith and Order” Commission, when all Churches and ecclesial communities were invited to make an official declaration about the BEM. BEM was undoubtedly one of the more important ecumenical events. However, BEM itself showed that there are unresolved dissenting views, and that the path toward a solution is not yet visible. This point was made by numerous Churches and ecclesial communities in their official responses, of which there had been about 200 by 1990. It was also evident in the reaction of the Secretariat for Promoting Christian Unity, which, by its very name and nature, indicates that the process of achieving unity is set between “already” and “not yet; it is real but incomplete. In the area of Eucharistic theology, BEM can be observed as a sort of summit of the ecumenism of consensus, and of theological agreement, but the question of its consequences and concrete application is still very much open. However, regarding ecumenical dialog on the Eucharist, BEM began a process of opening up some questions for serious study – for example, the relationship between Christ’s ontological-static presence and his soteriological-dynamic real presence in the Eucharist. Also the question of whether the Eucharistic event should be understood in both the anamnetic and epicletic senses, in order to give further expression to Christological-institutional and pneumatological dimensions? Then, the question of the relationship between Christ’s sacramental presence and his work of salvation synthesized in self-sacrifice eternally present in Christ. Further, there is a strengthening of awareness of the ecclesial meaning of the Eucharist, because the Spirit is called upon the Church, which emanates the commitment of active responsibility for the Church, as well as solidarity with all human beings. And not least, Christ’s presence and the actualization of his salvation are sacramental, but they are also effective indicators, a prophetic sign of the eschatological realization of salvation.