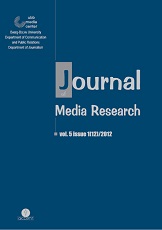 Summary/Abstract: The article seeks to bring some needed clarification on the notion of discourse and to demonstrate that the delineation of discourse from the notion of text is unjustified. We will support the hypothesis that the two notions, discourse and text, are esentially equivalent and we will prove that they consist of cognitive acts, results of a series of fundamental cognitive processes: signification and communication (symbolization and networking). The theoretical aspects which underlie our hypothesis and which have led towards the reevaluation of the communication phenomenon and the notion of communicative ability are also being presented. We then draw our conclusions by emphasizing the double dimension of any discourse, understood as an authentic act of communication: cognitive process and subjective interaction.