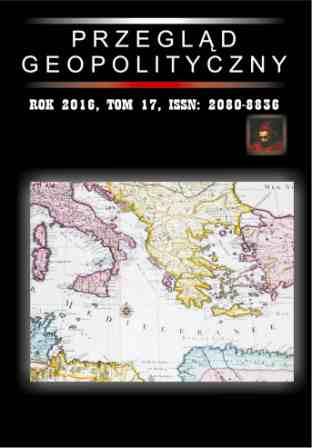 Summary/Abstract: The Middle East is a region that significantly affects world events. A relatively hopeful period in the form of revolutionary wave of the Arab Spring, from North Africa to Gulf countries has been “drowned” in a return to “business as usual”. The political situation has escalated to the extent possible in many countries of the region and has grown up into open military conflicts and terrorist activities of individuals or smaller groups. A number of hotbeds of tension is present in the region now - Syria, Iraq, Palestine and Afghanistan in a broader context. The most complicated situation is on the border between Syria and Iraq, where followers of radical Islamist terrorist organization of Islamic State has created a state of the same name on its conquered territories. Events that take place in this space greatly affect not only immediate contact regions of Europe but also more distant areas. Central Europe and Slovakia is no exception. “Export” of Islamic fundamentalism in Europe and extension of activities of Islamic state in the form of terrorist attacks and the recruitment of volunteers left no doubt that Europe and the world are facing very tough opponent. Conflicts taking place in this region have an impact on Europe in the secondary form too. Tens of thousands of migrants who come mainly from Syria and Iraq are trying to leave their homes due to military events and persecution and to save their lives by fleeing and a subsequent immigration in the developed countries of Central and Western Europe. This rampant process has caused conflicts within the EU and “stripped” different positions of individual countries diametrically.